In an audacious attempt to launder forty years of illicit gains, The Cuban government is planning to launch an initial public offering of a private company they control in Miami, Florida thru the New York Stock Exchange.

Buy Direct to get an autographed copy:

Odors of delicious garlic-laced food and pungent flowers hang in the air. Things happen here. They are called “Miami Moments.” Alex, the main character, gets recruited at UM by CIA. Lots of students actually did. The University of Miami once housed the CIA as thousands of Cubans fought Castro from the University’s South Campus. 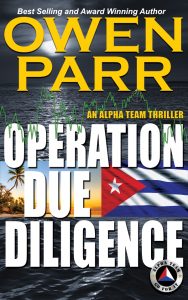 But don’t be fooled by all the back-stabbing, greed, conspiracies and underhanded actions of some. There’s more to this story, as a matter of fact, there’s a back story between Alex and Julia that readers of romance novels will devour. And by the way, many of the events depicted in this novel are based on true events. Only the names of the guilty have been changed to protect the author.

Few people know that Castro, a world-class criminal, personally ran the Dirección de Inteligencia. He ran it viciously. Alex, the main character weaves in and out of the web the Castro’s have created for their various venal and devastating strategies. Operation Due Diligence is a suspense-filled ‘movie’ in your mind. Paris, Chicago, Miami Beach and Havana swirl around the stage set.

The year is 2000, as the Cuban government is about to launder $10 Billion dollars of illicit gains from the criminal empire they founded when they took over the island in 1959. MonteCarlo Industries, Inc, a Miami conglomerate and a success story, is the vehicle which the Cuban government created and which has over the years, acquired numerous legitimate businesses in the United States. Rick Ramirez, a Miami socialite and talk of the town is the face of MonteCarlo Industries. Ramirez, a Cuban-American arrived in Miami in the 1960’s. Graduating from high school with top honors, Ramirez earned a scholarship to New Jersey’s Ivy League Princeton University, where he not only excelled in academics but also was captain of the Princeton Tigers’ football team and won the Bushnell Cup as Offensive Player of the Year.

The lead manager for the public offering Muller, Anderson, and Associates. Julia Estrada-Palma Muller, a Cuban-American herself, is the founder and senior partner of Muller, Anderson, and Associates, a small but very prestigious investment banking firm in Chicago. These firms, like hers, are known as ‘boutique’ investment firms and are sometimes responsible as the conduits for mega initial public offerings, merger and acquisition deals, and management of large sums of funds for high net worth clientele and institutional clients.

Alejandro Cardenas, Alex, as most everyone knew him, arrived in Miami at six years old when his parents had immigrated to the United States, fleeing the newly formed Communist government of Fidel Castro in Cuba. Alex enrolled at the University of Florida where he earned a bachelor’s degree in business and later graduated with a law degree from the University of Miami. During his studies at the University of Miami, he was recruited by the CIA with the promise that he would be involved in the overthrow of Fidel Castro’s Communist regime. Distinguishing himself in International Law studies and speaking in public forums against the oppression of socialist dictatorships in Latin America, he attracted the interest of the CIA recruiters. Alex saw his role with the CIA as a way he could both serve his new country and help to liberate his country of birth.

Owen Parr the author, a Cuban-American himself, lived the “Miami Drug Wars’ as a teenager in Miami. He fuses facts and fiction into an enjoyable easy read for your entertainment pleasure.

Operation Due Diligence is a fast-paced thriller that will keep readers engaged and turning the pages with anticipation until its final culmination.

“The book was easy to read, the pages flew. A spy novel; a love affair; the stock market and an IPO; vivid depiction of Paris, Miami, Havana … politics that have been 60 plus years in the making. As real life closely resembles the fiction created by Parr this novel stirs feelings deep inside those of us who have live in Exile and year for the freedom of those we left behind. Great work!!!!”