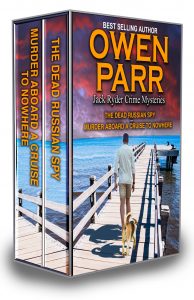 Two murder mysteries that will test your inner detective…

From married to single…From Wall Street to South Beach…From financial analyst to author of crime mysteries and now reluctantly to crime investigator. Jack Ryder is one of a kind. Living aboard a 54 foot yacht with his beagle Max at the Miami Beach Marina, Jack is about to become a consultant to the Miami Beach Police, but not by choice.
In novella #1 of 2, The Case of the Dead Russian Spy, Jack gets involved in solving a murder of what seems to be a copy cat killer of one of his novels. It turns out the victim could be a Russian Spy involved with the US government and the Russians. Either he helps the MBPD or he becomes their number 1 suspect.

In novella #2, what started as a cruise with his new buddy Miami Police Detective Logan Robert and two lady friends, turns into a whodunit aboard the cruise. On the first night of the Cruise to Nowhere, billionaire and family patriarch Gustav Inglenorth is found dead in his cabin, stabbed three times. This was supposed to be a private family cruise on the maiden voyage of The Majestic, a luxurious private yacht. Mr. Inglenorth was to reveal the content and distribution of the family trust to fifteen members of the family traveling aboard the yacht. Without a doubt, one of his family members is the murderer.

Forced to take refuge from a hurricane in the Port of Havana, Jack Ryder and Logan Robert must find the killer, among the fifteen members of the family, before the Cuban authorities interfere in their investigation and hold the family indefinitely.
Jack is a forty-year-old divorcee, and retired Wall Street Financial Analyst recently turned crime mystery writer. His new lifestyle does not include; – alarm clocks, suits, or ties – living carefree aboard a forty-four-foot yacht with his beagle – Max, enjoying life in Miami’s South Beach, the clubs and ladies that abound the area. His keen eye for detail in writing crime mysteries has made him an invaluable consultant to the Miami Beach Police Major Crimes Division.
Logan Robert, former Army Special Forces and now homicide detective for the Miami Beach Police Department, has relied on Jack’s deduction abilities to solve murder cases.

Readers of Agatha Christie and Arthur Donan Coyle all truly enjoy these novellas.

THE CASE OF THE DEAD RUSSIAN SPY

A cadre of FBI and DOJ agents are conducting an investigation of the newly elected president of the United States in Washington, D.C., for suspected… 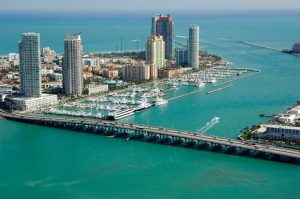 A cadre of FBI and DOJ agents are conducting an investigation of the newly elected president of the United States in Washington, D.C., for suspected ties to the Russian government. A presumed Russian spy is found tortured and shot in the face in his high-rise condominium in South Beach, Florida.
Incredibly, the perpetrators of the gruesome murder correctly copied the manner in which the victim was killed, as described in best-selling author, Jack Ryder’s last novel.
Jack is a forty-year-old divorcee, and retired financial analyst turned crime mystery writer. His new lifestyle does not include; – alarm clocks, suits, or ties – living carefree onboard a forty-four-foot yacht with his beagle – Max, enjoying the peace of South Beach, and the clubs and ladies that abound the area.
Logan Robert, former Army Special Forces and now homicide detective for the Miami Beach Police Department, gives Jack a choice; either be under suspicion for the murder or help solve this crime. But, there’s a condition; -because of the Feds hovering around the MBPD station like flies on molasses, waiting to see what the MBPD uncovers; -the murder investigation must be conducted from Jack’s boat, the Easy Ryder, docked at the Miami Beach Marina, while a bogus parallel investigation continues from the police station for the benefit of the Feds.
Jack wants no part of this. However, his choice of being embroiled in a murder inquiry with the Feds or helping solve the crime, especially one in which he feels plagiarized and violated, makes the decision obvious.
Multi Award Winning author and master storyteller, Owen Parr, has a new hit series; Jack Ryder, Logan Robert Crime Mysteries. The case of the Dead Russian Spy, is book one in the novella series.